The Owl’s Head Resort was acquired by Destination Owl’s Head in March 2018.

For more information on all Owl’s Head’s activities, please visit their website by clicking here. 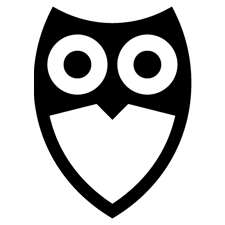 Agreement about contribution for parks - October 2021

The Municipality of the Township of Potton is pleased to announce that it has just signed an agreement with Destination Owl’s Head (DOH) that provides for compensation to the town of $800,000 over the next 15 years.

This agreement was reached following the adoption of the by-law concerning the contribution for the purposes of parks, playgrounds and natural areas.

The agreement means that the municipality will be able to obtain annual revenues of more than $50,000 for 15 years.

All revenues can only be used to establish, maintain or improve parks or playgrounds, and to preserve natural areas.

In addition to the $800,000 in monetary compensation, Destination Owl’s Head has transferred several trails around its golf course, which will allow the municipality to create a multi-purpose trail (walking, mountain biking, etc.) that will connect the village of Mansonville (from Vale Perkins Road) to Owl’s Head Mountain.
Click HERE to see the map

The Potton Municipal Council to formally rule by resolution during the regular meeting of August 3rd on Destination Owl’s Head Master Plan.

The current master plan for the Owl’s Head area was adopted in 1996 and no longer corresponds to development intentions. It therefore needs to be amended. The Owl’s Head Resort was acquired by Destination Owl’s Head (DOH) in March 2018.
DOH presented the municipal council with a first proposal for a revised master plan in October 2018. From November 2018 to November 2019, the municipality and DOH studied with various professionals the issues related to the revision of the master plan including, among other things, protection of natural environments and landscapes, harmonious cohabitation with existing residences, the capacity of municipal infrastructures and the relationship with the village core of Mansonville.

In light of the municipality’s initial comments, DOH worked actively on its master plan to develop a revised version in the fall of 2019. Subsequently, DOH began a citizen participation process prior to the procedure normally provided for by the Law on land use planning and development. This effort aimed to understand the concerns of the community and integrate them into the master plan before being presented to the municipal council. A Neighborly Relations Committee of eleven (11) people representing the main stakeholders in the community was set up in November 2019. This committee has met five times since its creation to comment on and improve the master plan.

In February 2020, Destination Owl’s Head posted a summary of the master plan on its website. All community members were invited to comment on this first public version of the master plan and make recommendations. Destination Owl’s Head received several comments from citizens, but also more elaborate communications from the Girl’s Camp Association and the Municipality of the Township of Potton.
In addition, between February 8 and June 17, 2020, Destination Owl’s Head held consultation meetings with four (4) main interest groups in the municipality, namely:
• Owls Head Owners Association (APOHOA)
• Girl’s Camp Road Owners Association
• Potton business owners
• Residents of Potton

These meetings were intended to reach as many people as possible to present the status of the master plan, answer their questions and receive their comments or recommendations. During this same period, Destination Owl’s Head maintained several written communications with the Girl’s Camp Road Owners Association and the APOHOA.

The municipal council meeting scheduled for August 3 and the following

This citizen participation process has enabled Destination Owl’s Head to better understand the issues and concerns of the community. These were taken into consideration in the development of the last version of the master plan. Following the recommendation by the Urban Planning Advisory Committee, the Town Council will officially rule on the matter by resolution during the regular meeting of August 3rd.

The master plan will require changes to the urban planning bylaws and these changes will have to be the subject of a public consultation provided for in the Land Use Planning and Development Act. Those eligible to vote will also be able to express themselves, if necessary, and certificates of compliance from the MRC will be required to complete the administrative procedure.

Once the bylaws are in force, the CCU and the municipal council will continue to oversee projects through the site planning and architectural integration bylaw (PIIA) and other applicable discretionary bylaws. DOH is also committed to continuing to work with the Neighborly Relations Committee in the implementation of the master plan. The committee’s mandate will be to ensure that the projects proposed and the work carried out are in accordance.

In order to avoid confusion or misinformation, Destination Owl’s Head proposed the distribution of the above information. The municipality is in agreement.

During the June 1st meeting, the municipal council adopted without change the four by-laws submitted as drafts at the May 4th meeting. These by-laws concern the OH7 zone, an area located southeast of the property, where the following changes have been made: minimum size of lots of 5,000 square meters, use of septic tanks and wells rather than connection to sewer and waterworks systems and modification to the by-law on minor exemptions to allow a slight reduction in a specific location in the protective strip between the road and the lake.

The framework by-law for overall development plans has also been adopted. This by-law has been amended to add the following uses: multi-family dwellings, spa and rental centers associated with recreational activities. In addition, it includes the specific objectives and evaluation criteria of the development plan for the MRC.

Now that these changes have been made, time has come to analyze Destination Owl’s Head’s master plan. The Planning Advisory Committee will make its recommendations to the municipal council, which, in turn, will determine, if necessary, the elements to be added. When the council decides to accept the master plan, it will do so by passing a resolution.

The master plan will bring about changes to zoning, subdivision, permits and certificates by-laws and site planning and architectural integration plans. These must be presented to the public and may be the subject of requests to participate in a referendum.

Letter from Mayor Jacques Marcoux - May 2020

At its regular meeting held on Monday, May 4th, the Town Council launched the process of major regulatory changes leading to the adoption of the Owl’s Head area development master plan. It has been suggested that the council is speeding up the process. It is not so; indeed, pandemic or not, it was agreed between the parties, the municipality and Destination Owl’s Head, that the process would start in May.

To sum up, at the May meeting, the council focused on two matters: the development of the OH7 zone located in the eastern part of the area. Previously, the development of this zone was allowed, but it was specified that it would be served by the sewer and waterworks networks. With the change, septic tanks and wells that will replace the networks. Thus, the minimum area of ​​a lot will henceforth be 5000 square meters. Finally, the minor exemptions bylaw has also been modified to render admissible a request for minor exemptions aimed at derogating from the minimum distance to be kept between a street and a lake or watercourse. This modification will limit the disruption of the natural environment.

The second matter concerns the framework regulation on overall development plans. The development plan of the Memphremagog MRC stipulates that in natural landscapes of higher interest (Owl’s Head is one of them), it is necessary to produce an overall development plan. Such a plan must include the uses, the construction, the projected housing density, as well as the development of the land and all the works which are related to this development such as the planned roads, the maintained woodlands, the typical buildings planned and a land fragmentation plan for the entire area.

The current master plan for the Owl’s Head sector was adopted in 1996 and no longer corresponds to the development intentions. We needed to amend it. To achieve this, it is first necessary to amend the framework regulation which includes among other things the uses, objectives and criteria, the latter two must at least be the same as those in the MRC’s overall land use plan.

In conclusion, it is important to underline that the Destination Owl’s Head project will have a big economic impact on our environment for many years and that we must, while taking care of our quality of life, make this project integrate our values. I must, in fairness, mention that Destination Owl’s Head has taken several non-mandatory measures to publicize and improve its project. Four public consultations as well as the creation of a neighborhood committee helped improve the development project while considering the concerns expressed.

On February 10 and 11, 2020, Destination Owl’s Head held meetings with merchants and residents of Potton to reveal their master development plan and commitments for the implementation of all projects.

To read the Synopsis of the Master Plan, please click here. 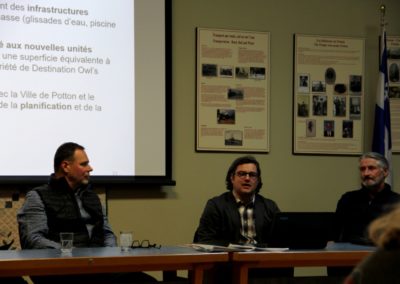 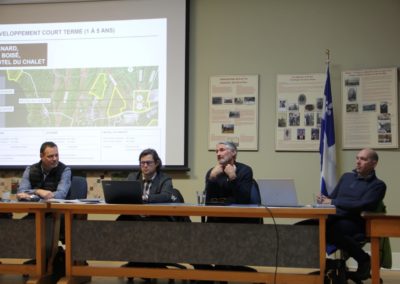 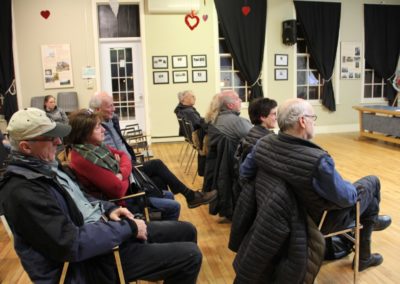 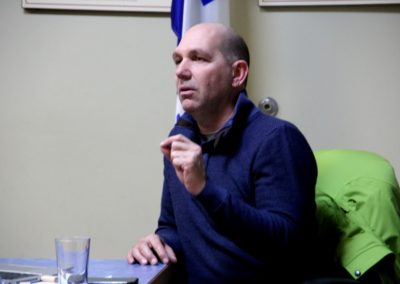 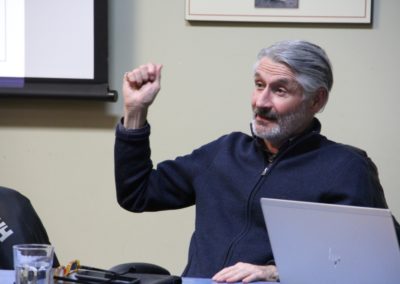 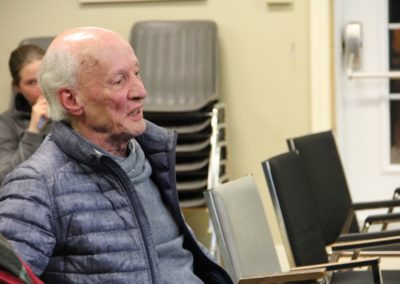